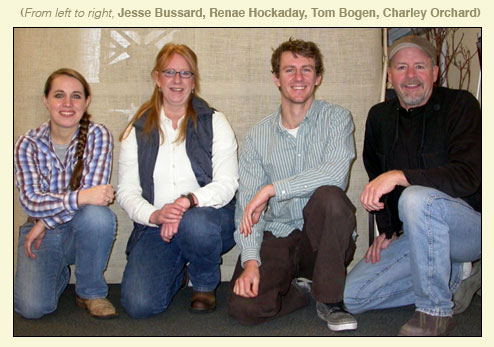 Fourth generation Wyoming rancher, Charley Orchard, developed what has become known as the Land EKG™ Monitoring System, a land health monitoring, management information, and reporting system. Since 1994, he has worked with ranchers across the US, Canada, Australia, and South Pacific, helping thousands track land health, improve management skills, and decision making. Charley’s background, experience, and education enable him to address many land issues and concerns. His business, Land EKG Inc., has a constant driving goal to promote sustainable business and ecological information models for those noble few stewarding the land and feeding our nation and the world.

Tom Bogen joined the Land EKG team in May of 2012 as the Director of Technology and Product Research & Development. He graduated from Montana State University in 2012 with a B.S. in Soil and Water Science and a B.A. in Spanish. He is working as a rangeland technician as well as a mapping and inventory administrator. Born and raised in Bozeman, Montana, Tom quickly garnered an appreciation from his surroundings for the environment and agriculture. While at MSU, Tom received an Undergraduate Scholars Program grant to study the standardization of methodology for producing biodiesel from algae at MSU’s Center for Biofilm Engineering. He also studied abroad in Buenos Aires, Argentina for a semester refining his Spanish. Upon graduating Tom received the award of “Most Outstanding Senior” from the Department of Land Resources and Environmental Sciences.

Renae Hockaday also graduated from Montana State University in 2012 with a B.S. in Natural Resources and Rangeland Ecology (formerly, Range Science). She is working as an executive assistant/ rangeland technician. Renae is a native of western Oregon, growing up near a logging town about 30 miles of Portland, Oregon. Preferring the agricultural environment, she moved to Montana in the early 2000’s and eventually returned to college to earn her degree.

Jesse Bussard is the newest addition to Land EKG™, joining in January of 2013 as Director of Marketing, Communications, and Customer Outreach. Jesse is a native of Pennsylvania and has spent time working with cattle operations across the country including Kentucky and Idaho. Her diverse agricultural background and marketing and communications savvy are helping to take Land EKG’s outreach efforts to the next level through an increased online presence. A graduate of both Penn State University and the University of Kentucky, Jesse has obtained degrees in Animal Science (B.S.) and Crop Science (M.S.). During graduate school in Kentucky, her research focused on the soil-plant-animal relationship with an emphasis on forage crops and livestock grazing systems. Jesse is a strong advocate for the ranching industry and is passionate about helping land stewards to better optimize their solar profit through creation of healthier soil systems and increased diversity of plant and animal communities. Her unique communications skill set combined with her knowledge of livestock and grazing systems management make her a strong asset to the Land EKG Team.

Rebecca Baril joined Land EKG in 2006 as a Rangeland technician and Database administrator. Originally from rural New Hampshire, she graduated from Montana State University in 2004 with a B.S. in Ecology, specializing in sustainable and integrated resource management practices. As an MSU student, Rebecca was awarded a grant through the Undergraduate Scholars Program to investigate damage in Montana Canola. Later, she worked with the MSU Animal and Range Department coordinating projects relating to insect pests and biological pesticide trials in several crops. Most recently, she has been involved with Montana producers and Extension Agents, tracking factors affecting Alfalfa stand longevity.

Rebecca is a member of Worldwide Workers On Organic Farms, working on organic farms in Spain and communities in remote South America. Rebecca also has a passion for education, having worked with the National Park Service and as a youth wilderness field instructor, and has served as an Americorps member at the McCall Outdoor Science School. She earned a Graduate Certificate in Environmental Education from the University of Idaho in 2006.